Compared to many styles of dancing, lindy hop, rock & roll and the various swing styles are relatively gender-equal. You can usually count on getting at least a few turns with a gent even if you’re on your own or out with girlfriends. But there still never seem to be quite enough chaps to go around, which is why I decided to learn to lead.

Don’t get me wrong. I’m no Ginger Rogers or indeed Fred Astaire. While, as a rule, I can get away without falling flat on my face, I’m not going to be winning competitions any time soon. Or even entering them.

Thing is though, learning to lead has a whole bunch of advantages and now I’ve taken the plunge I find myself wondering why more women don’t. We don’t suffer from any of that gender-insecurity nonsense men seem to have and frankly these days I actively choose to dance with girls as much as chaps.

So – here’s my manifesto for more girls to switch to the left foot and smash that glass dance floor. Ladies, you have nothing to lose but your shoe leather…

Ten Reasons for Learning to Lead 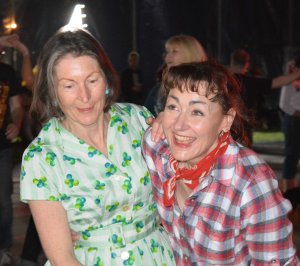 1 You get to dance more.

That’s the bottom line. If you can lead, even a little, that’s two more women get to dance even if the men are hanging round the bar.

2 It’s easier than it looks.

Honestly – once you’ve got that basic 6 or 8-count muscle-memory thing sorted (I did it by turning my ipod to ‘shuffle’ and just doing the basic step to every song that came on for about half an hour until I didn’t even think about it) it’s really simple to swap it to the other foot. It’s even easier in classic Rock & Roll jive where there’s less foot movement. Then you just gradually build up a few moves. You don’t need many to get round the floor in a three-minute song and they don’t have to be fancy – just fun.

3 You get to know the girls.

Most dance classes rotate partners to ensure everyone gets to dance with everyone else. I realised that socialising with male partners, I was missing out on half the room. Since I’ve started leading I’ve been able to get to know the girls too.

I’ve heard some girls say that if they go and ask a chap to dance it might look like some kind of come-on. I don’t buy that kind of claptrap of course; it’s a dance, not a marriage proposal. But shyer girls – even complete strangers – don’t mind coming up to me after seeing me lead a couple of women, because I’m not intimidating. Comical, perhaps. Inept? Of course. Intimidating – nah…

5 It improves your leading

Being a follower already, you know what you want from a leader. Someone told me that in Argentina, men learning the tango are obliged to be followers for a set period of time before they’re allowed to even start leading. I wish they’d do that here. Wabby leads, floppy hands, indecipherable signals – I may suffer from all of the above on occasion, but at least I know when I do now, and I can resolve to get better.

6 It improves your following

By the same token if you start learning to lead, you realise what chaps need from a follower. A nice bit of tension, a lack of iron-grip and, though it’s stating the obvious, the ability to actually follow rather than second-guess what’s coming up next or, worse, ‘lead from the back.’ Leading sharpens responses and helps identify bad follower habits you might have unwittingly slipped into.

7 You get to drive

And yes, it feels good to be in charge occasionally. You get to say what’s going to happen next. Feel the powerrrrrrrrrrrrr…

8 You learn why men dither

On the other hand you realise it’s also a responsibility. Ever wondered why your partner’s going round and round or doing one move over and over? It’s because the our minds have gone blank – we really have forgotten every move we ever learned. Leading makes a girl more understanding of men’s weaknesses. Honest. Well, okay it doesn’t…

Many people just don’t realise how easy it is to switch feet and are mightily impressed with some really basic stuff. Which is good for the ego. Even if it is a bit of a cheap win…

10 You get more dances with men

Oddly I’ve found I get more dances with men since I started leading. Some of the ‘better’ guys who wouldn’t normally have bothered with me assume (incorrectly, but who cares) I must be a ‘good’ dancer and worthy of their lofty attentions. To be honest one dance usually puts them right on that score but hey, it’s fun while it lasts. Basically I just like dancing; I don’t really mind who with.

A word of warning. In a direct counter to the above, some men feel intimidated by a girl who leads. This is their problem, not ours. If men spent more time on the dance floor instead of disappearing off to the bar, I might have been content to stay a follower.

Chaps sometimes joke ‘Are you a man or a lady tonight?’ My reply? ‘I am always a lady. Sometimes I lead.’